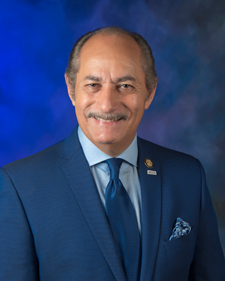 Guillermo Linares, Ed.D was appointed as President of the New York State Higher Education Services Corporation (HESC) in February 2017 and confirmed by the New York State Senate on May 30, 2019. As head of New York State’s student financial aid agency, Dr. Linares oversees one of the nation’s leading need-based grant programs, the Tuition Assistance Program (TAP), the first-in-the-nation program making public college tuition-free, the Excelsior Scholarship, the New York State DREAM Act, providing access to higher education for thousands of undocumented students, and numerous other scholarship and award programs that provide nearly one billion dollars in tuition and other college financial assistance to hundreds of thousands of New Yorkers every year.

Dr. Linares has the historic distinction of being the first Dominican-born elected to public office in the United States in 1991. He served from 1992 to 2001 in the New York City Council, where he advocated for quality education, vital health services, affordable housing and immigrant rights.

Dr. Linares was elected in 2010 as a member of the New York State Assembly, 72nd District, representing Washington Heights, Inwood and Marble Hill in Northern Manhattan in 2011 and 2012. He was elected once again for the same Assembly District in 2014 and served from 2015 to 2016.

Dr. Linares served as Commissioner of the Mayor’s Office of Immigrant Affairs (2004-2009) with the mission of strengthening bridges between New York City Government and immigrant communities resulting in greater access to City services and information and establishing new citywide policies on Language Access and Immigrant Heritage. He shares the experiences and aspirations of immigrant New Yorkers, having left his native Dominican Republic and arrived in the Bronx in 1966. Then, Dr. Linares drove a taxi for long hours to support his family and at the same time pursued a higher education.

For the past 40 years, Dr. Linares has remained committed to improving public education and championing immigrant issues. His advocacy started in Washington Heights, where he worked as a school teacher. Witnessing the need for active involvement, he ran for membership of the local school board and served there for three terms. In the 1980s, Dr. Linares and others were responsible for the building of desperately-needed public schools for the growing immigrant community in Washington Heights.

With other activists and leaders, Dr. Linares helped to establish the Community Association of Progressive Dominicans, the Puerto Rican/Latino Education Roundtable and the Parents Coalition for Education in New York City. Dr. Linares was also instrumental in the founding of the CUNY Dominican Studies Institute at City College, the Audubon Partnership for Economic Development and the Center for Latin American and Latino Studies at the CUNY Graduate Center.

Dr. Linares’ work has garnered him city, state and national respect. In 1998, the Black and Latino Legislative Caucus of the NYC Council elected then Council Member Linares as its Co-President. Dr. Linares was tapped in 1995 to serve in a national capacity as a member of the White House Initiative for Educational Excellence for Hispanic Americans. President William Clinton appointed him in 1999 as Chair of this Initiative. Dr. Linares served for six years as a board member of the National Council of La Raza. He was co-convener of Encuentro 2000 and Beyond, a national Latino leadership group.

Dr. Linares received a Bachelor of Arts and Master’s of Science degree from City College and a Professional Diploma in Administration and Supervision from Fordham University. He achieved his Doctorate in Education from Teachers College, Columbia University. He was recognized on City & State’s 2022 and 2021 Higher Education Power 100 List for his dedication to helping New York’s students on their path toward a higher education. Dr. Linares is married to a public-school principal, has two children, two granddaughters and two grandsons. His family has been critical to his accomplishments as a community activist, an elected and appointed government official and academic.